Back To The Homepage 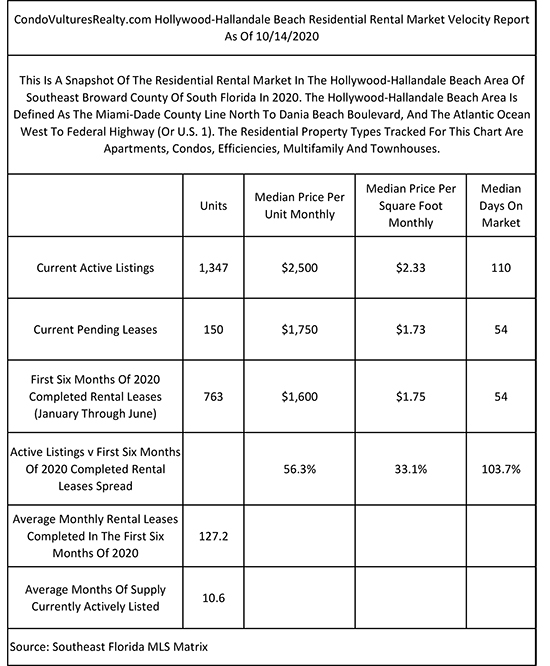 Tenants Paid Median Price Of $1.75 PSF Monthly For Hollywood-Hallandale Beach Rental Properties In First Half Of 2020

DOWNTOWN MIAMI (Oct. 16, 2020) - Nearly 1,350 residential rental properties are formally listed for lease in the Hollywood-Hallandale Beach market in the South Florida county of Broward during the COVID-19 pandemic, according to a new report from Condo Vultures® Realty LLC.

Based on completed leases of about 127 residential properties monthly in the first six months of 2020, Hollywood-Hallandale Beach now has nearly an 11-month supply of rentals - apartments, condos, efficiencies, multifamily and townhouses - available in the tricounty South Florida region of Miami-Dade, Broward and Palm Beach during the traditional Summer Buying Season, according to the report based on data from the Southeast Florida MLS Matrix.

When Florida Gov. Ron DeSantis declared a "state of emergency to create a pathway to obtain funding and resources to stop the spread of COVID-19" on March 9, 2020, the South Florida residential real estate market continued to function, albeit with changes for safety that included social distancing and a push for virtual tours instead of buyer actually visiting properties.

Nearly a month later on April 3, 2020, DeSantis instituted a 30-day "statewide stay-at-home order" that effectively shut down the Florida economy but in doing so deemed residential and commercial real estate businesses "essential services," according to an industry press report.

Despite the ability to transact real estate during the "stay-at-home order," it is unclear how many buyers have been willing to view properties - either in person or virtually - in hopes of purchasing residences. It is also unclear how many sellers have opened their properties to potential buyers given the contagiousness of the COVID-19 virus.

Once the "stay-at-home order" was finally lifted on May 4, 2020 for nearly all of the state - excluding the tricounty South Florida region of Miami-Dade, Broward and Palm Beach - the Florida economy was thought to be in recession like much of the United States. Palm Beach County eventually opened its economy on May 11, 2020, and a week later both Miami-Dade and Broward counties opened for business on a limited basis on May 18, 2020.

A month later during the week of June 22, 2020, Miami-Dade and Palm Beach counties instituted mandatory mask wearing in public areas in response to a "spike" in the number of COVID-19 cases in the South Florida region, according to a press report.

Broward County - located between Miami-Dade and Palm Beach counties - recommended but did not mandate masks be worn in public areas.

After Independence Day, Miami-Dade County took a step backward and shut back down restaurant dining rooms, party venues, gyms and short-term rentals due to a spike in new COVID-19 cases, according to a press report.

With the situation worsening, the state of Florida surpassed New York on July 12 for the distinction of having the most new COVID-19 cases reported in a day with more than 15,300, according to a press report.

As of July 24, Florida had more than 402,300 confirmed cases of COVID-19 with nearly 5,700 deaths, according to the Florida Department Of Health's COVID-19 Data And Surveillance Dashboard.

Following the Labor Day holiday on Sept. 8, the COVID-19 pandemic had resulted in nearly 650,100 confirmed cases and about 11,915 total deaths in Florida. In the tricounty South Florida region, there were more than 276,635 cases and about 5,070 deaths, according to the state website.

In a pair of encouraging steps in consecutive weeks, Miami-Dade County joined Broward and Palm Beach counties in once again permitting restaurants to allow indoor dining at levels of up to 50 percent of the seating capacity as of Aug. 31. The move in Miami-Dade County was based on a leveling off in the number of new COVID-19 cases and pandemic-related deaths, according to a press report.

The following week on Sept. 8, Palm Beach County transitioned into Phase 2 with the reopening of entertainment businesses such as movie theaters, playhouses and bowling alleys. Additionally, patrons could once again be served drinks at the bar of various venues. Retailers and museums were also allowed to operate at full capacity, according to a press report.

A week later on Sept. 14, DeSantis upgraded Miami-Dade and Broward counties into Phase 2, joining Palm Beach County and the rest of the other counties in Florida in gradually loosening restrictions in a quest to return to the new normal. Despite the move by the governor, the mayors of Miami-Dade and Broward counties said they are planning to loosen the restrictions eventually but not immediately, according to a press report.

In a surprise move on Sept. 25, DeSantis upgraded all counties in the state of Florida to Phase 3, which permitted the opening of all restaurants, bars and other businesses at 100 percent capacity.

As part of the move, DeSantis suspended Florida municipalities from issuing fines to people who refuse to wear masks, according to press reports.

In the first week of October, Miami-Dade and Broward counties began to welcome back students, teachers and support service in opening public schools on a limited basis, according to a press report.

This being said, about 150 rental properties are currently under contract - or pending - and waiting to transact at a median monthly asking price of $1,750 per unit or about $1.73 per square foot in Hollywood-Hallandale Beach.

In the first six months of 2020, the median transaction price of a Hollywood-Hallandale Beach residential rental property was about $1,600 or about $1.75 per square foot monthly, according to the data.

In the first half of 2020, a landlord needed about 54 days - on a median basis - to lease a Hollywood-Hallandale Beach residential rental. The current median Days-On-The-Market rate for a Broward County residential rental property listed for lease is about 110, according to the statistics.

The number of Days-On-The-Market for the residential rental properties currently under contract is about 54 in Hollywood-Hallandale Beach, according to the statistics.

CondoVulturesRealty.com is a licensed Florida brokerage that specializes in assisting buyers and tenants in value-oriented acquisitions of condos in the tricounty region of Miami-Dade, Broward and Palm Beach.